The Voices of the Coffee Farmers 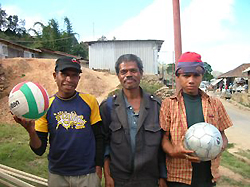 Mr. Vicenti is elected to the chief of Koulolo group with 26 members every year since 2003 when they firstly set up the group and started the activities. When he was elected as chief as the 5th time in January 2008, he was asking for members’ cooperation and supports with tears because he felt too much burden.

He doesn’t talk too much and has popularity. He actually is not from Koulolo. He was born in 1968 in Hatubuti area where next to Koulolo, as the youngest child of 6 children. His father was a cook for a Portuguese family in town. He graduated a junior high school and got a qualification to be an Indonesian government employee. He worked as a controller for warehouse where to stock rice for the military and governmental employees. He married to Domingas, who is from Koulolo, and moved there where her family’s farm is. They call ‘mane foun’ which means ‘new man’ for Koulolo. He is the father of 8 children, the oldest is 15 years old.

To compare the livings between Indonesian time and present, Mr. Vicenti says “Everything was cheap in Indonesian time. Even rice for one dollar, it was so heavy and had to bring back with horse. Now, you can carry myself and bring back rice for 10 dollars. On the other hand, coffee price went down and life becomes harder. We became independent but not having our own currency, it’s irony”. 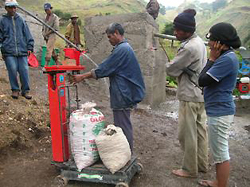 Does he mean Indonesian time was better? “No, it just started. Let’s see”, he said with warm smile. He tells his thoughts to the cooperative. “Before joining the cooperative, I had to bring coffee cherries far away to sell. Using horse to bring, and by the time of reaching scaling point, all the coffee were rotten and couldn’t sell, and brought all back home. Now you can process coffee at our own area by our hands. It’s much easier and better”. “To develop the cooperative activities more, I would like to distribute to sell vegetables and beans jointly. We can harvest beans twice a year in Koulolo. We also divided seed potatoes and grow to test, and realised we can sell with good price in November when production gets low”.

For Mr. Vicenti, the cooperative is the future that he can leave to children. “What I concern most for children’s future that the school is too far away. Small children can be hungry before reaching to school, the parents have to send them to school and bring back home, but we are also busy with farms. My oldest 15 year son is now in the 2nd primary school. The second son is now 13, learnt alphabets at the cooperative’s literacy training course”. For Mr. Vicenti, who doesn’t talk much at front of people, his most difficulty is that members who trust their chief, tell their requirements what so ever to him. However, his belief is solid. “We want to keep the cooperative until we die and hand over to children afterwards. Single parson can’t do much, but we can do something if we work together. We have difficulties now, but we don’t want to dispose it for the children”. 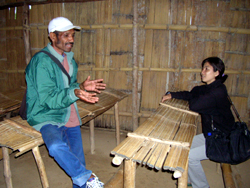 He is the father of 16 children (however 5 were passed away). As he is the oldest in the group and also used be a teacher, he is the key person to solve problems in culm inside of the group at all time.

In 1972, he came down to the capital Dili to look for a job, he learnt Portuguese during working for Hotel Turismo. He joined a member of FRETILIN (Revolutionary Front for an Independent East Timor) to fight for the immediate and complete independence of East Timor from Portugal in 1974. The Indonesian militaries invaded Dili on 7th December, 1975, and his military unit was pushed back gradually to mountains in Dili, Aileu and Maubisse. In 1979, they crossed the mountains and finally reached to Betano in Suai district by the South coast, where he met his companion for life, Maria Estella. However, he was captured by Indonesian military and surrendered. Young Vitorino told Maria Estella to stay with her parents, but she said she wants to follow him wherever he goes, she came to Maubisse by following him.

Backing to Maubisse, tortures by the Indonesian were waiting for him. Binding whole body with rope in the forest and left for days by keeping eyes on. “`If you leave me by feeling pain to death like this, just kill me with one big stab!’ – I told the military who was watching me, he felt flinch and released the rope”.

Now Mr. Vitorino looks neat with short hair and slim body, but used to have long hair almost reaching the waist and long moustache at the time of resistance. One day, they took him to the basket ball field at the Maubisse market, been sat down by both hands cuffed. While all the audiences are watching, Indonesian militaries lit fire on Vitorino’s moustache. “I shouted on the militaries ‘You are fighting for your president Soeharto. We are fighting for OUR president!’”. Maria Estella was watching this scene by nursing Vitrino’s 2 year-old youngest brother.

Their child was born in 1983, and he joined training in Dili to become a teacher. He worked as a primary school teacher from 1985 to 1999 in Suai, Ainaro and Maubisse. After the independence referendum in 1999, the teacher employment examination was held in 2001. Vitorino passed the exam and received 3-month salary, however, someone else got his position. 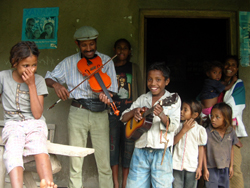 He says “The Ministry of Education in Timor-Leste are already corrupted with the connections. There are government officials from Ainaro working there, and that is why teachers from Ainaro are coming to Maubisse to teach at primary schools. The teachers who are learning Portuguese at the same time as teaching Portuguese to children, I speak much better Portuguese than them. They don’t select teachers by quality, there are still bad custom left from Indonesian time. I prefer to work as a farmer with NGO like I do now, rather than working in such bad conditions”.

In Russlau area, there are 3 young men who used to be solders of FALINTIL (The Armed Forces for the National Liberation of East Timor) in 1999, who are the next generation after Vitorino. Many of people have their own story how he or she fought for the independent even though they were not solders. We would like to live together with them by having hope of the future of East Timor and talk their dreams to their children.

Tweet
Timor-Leste Coffee production The Voices of the Coffee Farmers