Emergency Assistance for the People of Myanmar

PARCIC has launched the program to support the livelihoods of the Myanmar people who had lost their jobs and incomes due to the participation in the Civil Disobedience Movement, one of the protests against the the country’s ruthless military, which seized power in a coup d’état on Feb. 1, 2011

PARCIC had been discussing with civil society groups of Myanmar and local and international experts to identify what to do for our Asian neighbors in a plight. We have now decided to launch a program to support livelihoods of women mainly in Yangon who lost jobs and/or incomes as a result of participation in the Civil Disobedience Movement (CDM).

The CDM has spread all over the country through social media and other means. Citizens including doctors, nurses, teachers, academics and civil servants refused to cooperate with the Junta. More than 400 thousand people lost jobs and incomes due to involvement in the CDM. Prior to the coup, these people used to earn about US$150 a month: they now continue various activities necessary for the resistance, utilizing their expertise, despite the loss of incomes. Assistance for these people started to come from the Western countries and the UN organizations, but the needs far exceed the availability.

On February 1, 2021, the Myanmar national army declared a nationwide state of emergency and gained control over the government. In response, citizens of Myanmar staged protest demonstrations in Yangon, the largest city and former capital of the country, and various other places. To quell continued protest by the people, the military opened fire to the demonstrators.

The news report that a young woman named Kyal Sin , known as Angel on March 3.was killed in Mandalay on March 3 amid an indiscriminately shooting by the security forces gave the shock both inside and outside of Myanmar . She was shot in the head as she was running away from the site, turning her back to the shooting troops. She was one of many ordinary citizens of Myanmar who couldn’t remain silent in the situation, a hair dresser of just 19 years of age. 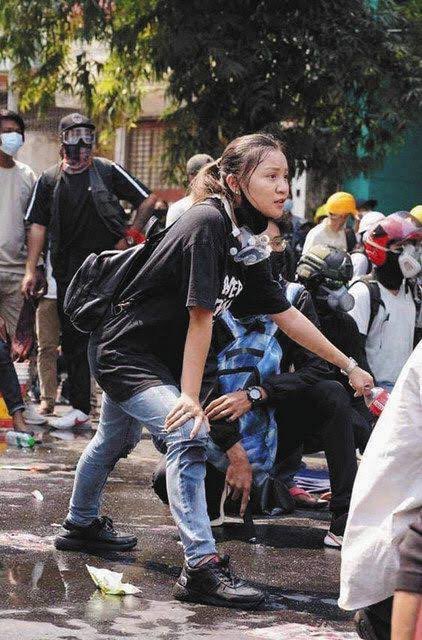 Kyal Sin , known as Angel killed while attending an anti-coup protest in Mandalay

As of February 2022, the death toll from the shooting by the national army and security forces was 1,582 and the number of imprisoned arrestees was 9,378. Fighting between state forces and armed insurgent groups of ethnic minorities has been escalating; air raids are waged. The internally displaced population totaled about 810, 000 in January, 2022. Villagers of the localities support these refugees with food and other basic needs, but their livelihoods are also threatened with repeated air raids: they are unable to harvest the produce. Food shortage is getting serious as a result.

On April 16, CRPH, the committee representing the parliament elected by the people of Myanmar in the general election of 2020, established NUG, the National Unity Government of Myanmar, as the sole legitimate national government of the Republic of the Union of Myanmar. The cabinet members of NUG include lawmakers elected in the 2020 general election and representatives of ethnic minorities. State Counselor Aung San Suu Kyi and President Win Myint who have been under house arrest remain in the positions.

On October 7,2021, the European Parliament adopted a resolution urging the military council: 1) to respect the results of the 2020 general election and hand over the power to a civilian government; 2) to immediately release State Counselor Aung San Suu Kyi, President Win Myint and all other detainees; and 3) to formally accept NUG and CRPH as representatives of the country.

In addition to the continuing political unrest, the novel corona virus has exacerbated the economic hardship. In July, 2021, the daily count of new Covid-19 cases, excluding those among the internally displaced, exceeded 5,000 continuously. The value of Myanmar’s currency, the kyat, plummeted: 1US$ was about 1,300 kyat before the coup, but is now 3,000. Prices have soared and unemployment is rising even in Yangon, the largest city of the country.

With the funds to be raised through donations by citizens in Japan, PARCIC provides bout US$60 assistance for the target households. The amount is supposed to cover food expenditures for a 4-member family for 20 days.

We are planning to introduce activities for income generation assistance and operations in non-urban areas, depending on the situation in the future.